As a consequence of the unusually high inflow of asylum seekers and refugees into Europe in 2015, issues around asylum procedures, legislative and policy changes, and longer-term issues around successful integration emerged, and an increased interest in social inclusion measures and integration appeared in the EU and Member States agendas (Eurofound, 2018; Konle-Seidl, 2016).

In a bird’s eye view, as the Declaration for Refugees and Migrants (United Nations, 2016) points out, an unprecedented level of human mobility can be witnessed. In 2015, migration was growing at a faster rate than world’s population, as it surpassed 244 million. Roughly 65 million of them were forcibly displaced persons, including over 21 million refugees, 3 million asylum- seekers, and over 40 million internally displaced persons.

The events of 2015 brought highest media and political attention to migration. Together with the rise of migration across the world, the difficulties that governments encounter in successfully integrating migrants and in guaranteeing their dignity against prejudice and extremist attitudes came to the open, particularly in contexts of crises or socio-economic hardship where prejudice heightens.

In this context, migration has become an everyday reality, the norm rather than a temporary deviance, which makes it essential to formulate coherent policy responses. It has become crucial that “host countries strongly engage with different, innovative and constructive approaches to migration in order to positively integrate migrants, thus contributing to showing migration as an enriching aspect of contemporary societies

rather than challenges to their welfare” (UNU Network, 2015). Moreover, the UNU Migration Network emphasised that “cities are the places where questions around migrant inclusion will be urgently and tangibly addressed in the years to come (…) local governments are going to play an increasingly central role in developing policies that take into consideration (…) inclusion into economic, social, and cultural spheres of urban life”. 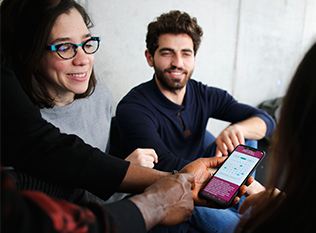 Acknowledging the power of data analytics and data integration on the one hand, and the potential of easy-to-access, audio-visual user interfaces on the other, MICADO aims to deliver an ICT solution that makes integration process more efficient and effective for three user groups: 1) public authorities and administration working in fields related to integration; 2) engaged civil society and local communities, and 3) migrants, i.e. mainly but not exclusively asylum-seekers and refugees.

The envisioned solution is to establish effective channels for communication and data exchange, and provide valuable information and integration services to all three target groups via customised user interfaces. For this, MICADO will create so-called data dashboards and cockpits: precisely designed information displays respective interactive applications that make complex information understandable, easy-to-use, and morevaluable for end-users.

1) improving the information flow between all stakeholder groups (top-down / bottom-up) by making existing data resources in administrations and authorities more accessible, and by securing data quality in all processes of transmission (“Data Streamlining”);

2) generating new knowledge for the strategic and operational management of migrants from the purposeful combination, analysis, and visualisation of available data (“Migration Intelligence”);

Addressing a key demand from public authorities, MICADO gathers personal data from migrants on a consensual basis, and under full consideration of the EU and local data protection laws. With an attractively designed Migrant Cockpit, MICADO raises important data on the migrants’ personal and biographical background (education, professional skills, etc.) and makes them accessible to Public Authorities for the provision of targeted integration measures.

To attract a large user group to the Migrant Cockpit, a chatbot language interface and automated translation features will be developed as essential features of the Migrant Cockpit, innovative for public migrant integration processes. With them, MICADO wants to lower the threshold for the reception of public services substantially, in exchange for the provision of personal data. 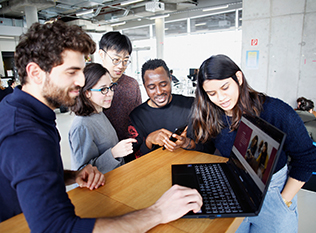 MICADO aims at creating an business intelligence solution that is a) universally applicable to all cities and regions in the EU, but b) maintains “built-in” adaptability to local contexts. For this, MICADO applies a novel methodology leading from challenges and requirements that are shared in each partner region, to a “one-fits- all” solution, from which, in turn, local-specific applications shall be derived even beyond the actual project runtime.

The MICADO consortium will develop the “one-fits-all” solution in accord with all partners, and pilot it thereafter in four cities in parallel. To do so, it will provide a harmonized framework for demand definition and user co-creation, for implementation, and for monitoring across the different locations to ensure the eventual successful convergence of results.

In order to create attractive and accepted data services, MICADO aims to involve all relevant stakeholders (especially migrants themselves) in the design and development of the solution. MICADO will deliver and employ co-creative formats that engage authorities, civil society, and migrants throughout the design and development process. For the convergence of (potentially conflicting) local challenges and requirements into one universal solution, innovative strategies from Design Thinking and Knowledge Architecture will be applied.

MICADO aims to combine institutionalised migrant services with societal activism and bottom-up dynamics. In the recent refugee crisis, the engagement of volunteering citizens, migrants associations, hacker communities and other actors from the engaged civic society proved to be a driving force of integration work. MICADO envisions an “open project” that “diffuses” from the project consortium to local stakeholders in the course of the project. With specific uptake measures early-on in the project, it prepares local co-development activities that continue past the project duration.