13 Oct International Conference on the multidimensional housing deprivation – Local dynamics of inequality, policies and challenges for the future

More than a century has passed since housing shortages, primarily affecting workers migrating from the countryside and rural areas to urban areas, were considered the social issue of the day.

Increasing the availability of housing and ensuring home ownership seemed to be appropriate responses, but even today, in a country like Italy where home ownership is the predominant form of entitlement, the housing issue is far from resolved and is subject to dynamics, trends and structural changes of various kinds.

It is now generally accepted that the housing issue has completely different characteristics from the past and that it involves a wide range of populations and social groups. In the past, the housing problem almost exclusively affected the local population, especially those who moved to the more industrialised centres mainly for work reasons, while today it involves a large segment of the population and is, in fact, the result of a multiplicity of phenomena. The current demand for housing has been affected by public policy dynamics, but also by sociodemographic, economic and cultural factors.

The metamorphosis of the population in terms of life expectancy and ageing, the growing complexity of family models, contemporary migratory flows, the issue of (im)mobility, especially in times of a pandemic, have profoundly changed housing styles and the demand for housing. Moreover, growing impoverishment, as evidenced by the increase in both absolute and relative poverty and in general due to global economic and financial crises, accompanied by major and profound changes in the labour market and welfare systems, has had a disruptive impact on housing. All of this has taken place within the framework of emerging housing policies, which are not without their problems, and which are increasingly being defined as social housing, paying greater attention to the social needs of individuals, to the internal environment and functionality of housing, to the livability of shared spaces, to the impact on neighborhoods, and to environmental sustainability.

The issue of housing is thus today transversal and embraces issues that are only apparently distant from each other:

In light of these premises, the aim of the conference, organised in four thematic sessions, is to bring together scholars from different disciplinary perspectives who have investigated the phenomenon from different points of view regarding the theoretical and empirical research aspects that revolve around the theme of housing and housing needs.

Contributions that analyse the theme from a theoretical point of view, capable of reactivating the process of reflection on the distinctive features of the new housing question, will be welcomed, as well as contributions that share the results of research that has been completed or is at an advanced stage of development, capable of providing elements of evaluation and methodological guidelines on the theme. 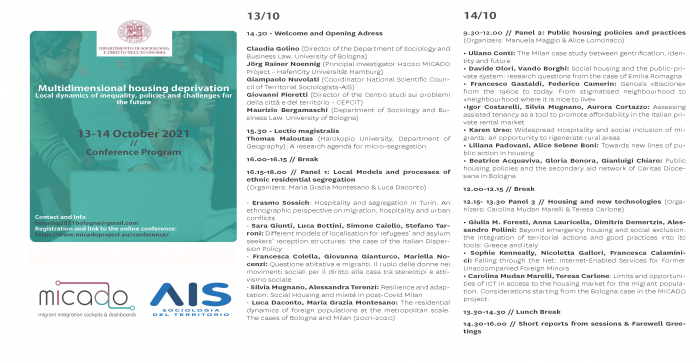 Explore the Book of Abstracts 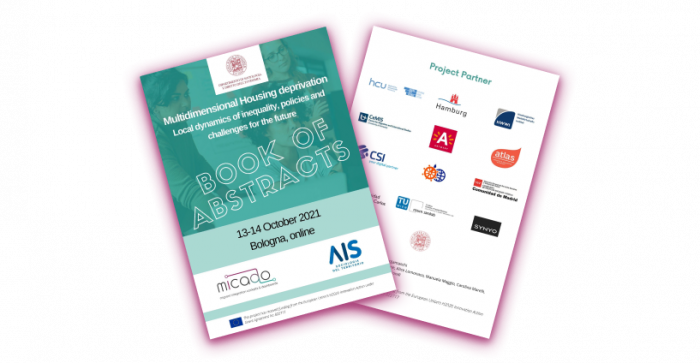 Public housing policy is one of the main fields of study for understanding contemporary housing dynamics and public commitment to local housing needs.

The main issues to be addressed should be related to: – history and regulatory developments, with contributions that offer a longitudinal reading of local housing policies and provide a historical or comparative reconstruction; – old and innovative policy tools, with contributions that empirically and/or theoretically explore specific housing support tools, contextualising their introduction, any metamorphosis, the results of their use and any aspects of complexity or criticality; – social mix experiences and practices, with contributions focusing on aspects connected to the phase of introduction of the social mix criterion at local levels or focusing on individual social mix experiences carried out at national, metropolitan, municipal, neighbourhood, street, subdivision, building or other identified “territorial scale” levels, explaining in this case the genesis and development of the individual experiments, the actors involved, the objectives envisaged, the logical-scientific process followed in defining the “weight” of the various social components, and any process and outcome evaluation phases envisaged.

Contributions from scholars, administrators and operators involved in the sector on a daily basis in various capacities will be particularly welcome, and will therefore be able to provide a critical reading of both the process of constructing regulations, policy instruments and mixité experiences, and the social phenomena involved and interconnected with the housing policies and practices examined.

The study of the dynamics of foreign population settlement is crucial to understanding contemporary urban transformations. The international academic debate has widely highlighted the differences between the North American and European models regarding the distribution (and concentration) of migrants in cities. In fact, the levels of segregation in American metropolises have always been higher than in European ones, where, also due to the presence of a different welfare state, the structural conditions for the development of real ghettos are not present.

However, the absence of macroconcentrations at the urban level should not lead to considerations that mythologise European cities as inclusive and free of phenomena of marginalisation, exclusion and social isolation of migrant populations. Moreover, the 2008 crisis, neo-liberal policies and the consequent downsizing of welfare have produced an increase in housing inequalities – amplified by the pandemic – which have translated into new and different forms of socio-spatial segregation.

This panel invites contributions that explore both the empirical and theoretical dimensions of the residential distribution of the migrant population, with specific attention to the mechanisms of segregation, peripheralisation, marginalisation and social exclusion, within metropolitan neighbourhoods as well as in medium-sized cities and small towns. The panel intends to promote a reflection focusing on the theoretical framework, the use of empirical data and original research methodologies in urban studies.

The housing issue is one of the main challenges for the inhabitants and communities living in today’s cities, affecting, to a greater extent, the less affluent and vulnerable population groups that are more exposed to forms of discrimination and social marginalisation. Although there is a growing conviction that information and communication technologies (ICTs) can simplify housing problems by improving the transparency of housing supply and facilitating the meeting of growing demand, at present it is not clear whether ICTs can actually reduce the burden of discrimination in access to the housing market, especially for foreign residents. The panel intends to focus on a relationship that is still little explored in international literature: that between housing issues, migrant populations and ICT solutions, in order to provide some empirical and theoretical elements that can guide future reflections.

The aim is to provide some analysis and partial adaptive answers to what is one of the main challenges for an effective integration of the migrant population, often economically more vulnerable and socially discriminated. The call aims to gather research on the topic that analyses the issue from multiple perspectives. Priority will be given to contributions based on empirical research exploring the housing needs of vulnerable social groups and the contribution provided by ICT solutions, although there is also an interest in more theoretical and critical reflections, based on a reconstruction of contemporary, national and international literature, and on the possible role of ICT in solving housing problems for vulnerable populations.

We also welcome contributions that address the issue from a solution-oriented perspective, both through policy proposals and ICT-related tools (specific apps to facilitate the search for housing for migrant populations). 4. Housing in inner areas (Session coordinators: Tommaso Rimondi and Melissa Moralli) There are two opposing forces at work in inner areas: on the one hand, they are marked by decadeslong dynamics of “contraction” as a result of depopulation and the progressive disappearance of services and economic activities, which make them generically “fragile” areas; on the other hand, in recent years, these areas have seen movements in an opposite direction. A wide range of literature has focused on the “repopulation” processes affecting some marginal areas, by “new inhabitants” driven by heterogeneous motivations.

The availability of affordable housing and the possibility of achieving sustainable and slow lifestyles are just some of the reasons behind these movements back to the inner areas. Moreover, it has been pointed out by many that marginal territories can develop innovative practices in the field of environmental sustainability and the inclusion of foreign populations who, by force or by choice, settle there. Last but not least, renewed interest of territorial development policies towards marginal areas has provided the backdrop and, in some cases, oriented these movements, in an attempt to contribute to a “regeneration” of these communities capable of reversing depopulation. The forms and modalities that these policies take at a local level can range from the enhancement of the territory’s natural and cultural resources in a market context to the strengthening of services to protect the inhabitants’ fundamental rights of citizenship. In this framework, the call aims to attract contributions focusing on: